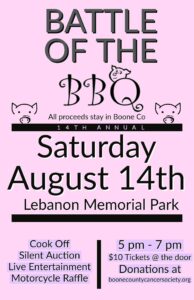 The Boone County Cancer Society had the best year ever raising more than $80,000 profit from this year’s Battle of the BBQ. It was the 14th annual event held at Memorial Park in Lebanon. The battle was won by the team of Scott Pell for Sheriff as the overall champion. The Lebanon Elks Club was the winner of the People’s Choice award which was voted on by monetary donations at the individual booths. More details in the Lebanon Reporter.