You Are Here:Home>Obituaries>Beverly Renae Twitty 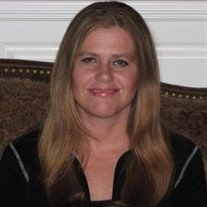 Beverly was a 1992 graduate of Lebanon High School and had attended Ivy Tech in Lafayette. She was married to Wayne Whittaker and they had later divorced.

Beverly worked as an LPN for both Homewood Health Campus and Hickory Creek in Lebanon.

She attended Lebanon Rock Church. She was a kind and loving daughter, sister, mother, and grandmother who adored her children and grandson. In addition to her family, Beverly enjoyed working in the yard and flower gardening.

Beverly was preceded in death by one brother, Larry Franklin Twitty, Jr.

Funeral Services are planned for 3:00 p.m. on Monday, May 10, 2021 at Myers Mortuary, 1502 North Lebanon Street, in Lebanon, Indiana.
Visitation will be held from 2:00 p.m. until the time of service.
Interment will follow services at Oak Hill Cemetery in Lebanon.

Memorials may be given in her memory to Lebanon Rock Church, 504 East Elm Street, Lebanon, Indiana 46052.