You Are Here:Home>Boone County History>Bierce Talks Farming In Boone County In The Early 19th Century

The first half of the 19th century saw dramatic changes in Boone County. There was exploration, then mapping, acquisition by the federal government, then distribution to the citizen. With that came conditions; To keep the land you had to improve it (make it farmable)  within 5 years.

I went fishing the other day and I caught a fish thhhhiiiisssss long.

The stories that filtered back to West Virginia, Pennsylvania, North Carolina and the other points where travelers to the Northwest Territories started their journeys probably elicited the same response you give to my initial fish story. It is human nature to believe that examples outside the “norm” are nearly unbelievable. And stories of this new territory must have fit that pattern. But the intrigue appealed to the pioneer psyche. 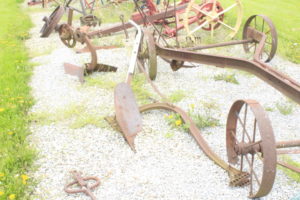 Let me interject here, the story of farming in the last 200 years is not linear. It comes in many steps. Once you got to the territory it became apparent that farming would be different than it was in the “developed” New England or even in the central Atlantic states where you started your journey. The possibilities were enormous.

But you are still stuck with the matter of swamps, bogs, forests and only half the land in the county was tillable.

The land was cheap.    But it had to be improved–you had to live on it and make it productive.

You paid yourself after the “crop” was  in and the crop was your corn, pig, horse, cow, milk, butter, timber, cotton, wheat, hemp, flax, chicken or whatever met your fancy and that you had the ability or tools to achieve.

But you want to raise corn or wheat. Ok…. Raise wheat. But you must first “open up” some land. Either cut the trees, drain some swamp, or marsh then till it.

A plow was created, first with wood and later steel. This crude device would open the soil as deep as a person could pull it before a means of pulling it with a horse. Plows left the ground rough, so It had to be leveled and broken down with a harrow. 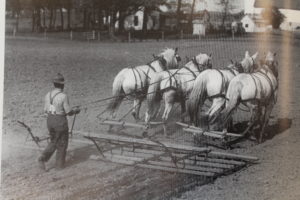 The plow was originally made as a single plow and later was made with two or four bottoms, implements were pulled by teams of two, four or six horses or mules, the driver rode on the implement rather than walk behind it.

Earliest methods of planting were accomplished by “hand” or the extension of a hand. Corn Was planted by opening the soil with a crude collapsible wedge. Wheat, oats and barley were broadcast by hand. Later, mechanical planters were created to plant seeds uniformly in number, spacing and depth according to the type of seed.

“In 1830 about 250-300 labor hours were required to produce 100 bushels (5 acres) of wheat with a walking plow, brush harrow, hand broadcast of seed, sickle and flail.”  (Farm Machinery and Technology 1776-1980) That is; open the ground, plant the seeds, harvest by hand and separate straw from grain and all done by hand tools and yield 20 bu. per acre.

Given 214 working days between April 1 and Nov. 1, and assuming 13 hours of daylight per day, one man might expect to produce 927 bushels of wheat if he did nothing else. And that is after the soil has been logged and drained.

Given the constant of 2782 daylight hours, the industrious farmer sought to wring more production out of each hour spent in production tasks… one could hire more labor, raise his own (that took usually about 15 years) or improve the tools. . Soon crop selection was determined by what grew best in Boone County versus what grew best where the settler originated. Products such as cotton, hemp, flax, were tried and apparently found to be not as productive as corn and beans and thus largely abandoned by 1850.

Now, those farmers who stayed in Indiana soon found out that some crops did better than others.

More on that next time.