You Are Here:Home>Obituaries>Bobby Dean Wilson 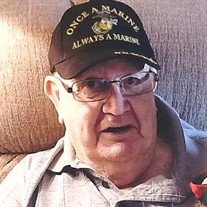 Bobby Dean Wilson, 85, of Lebanon, Indiana, passed away on Tuesday, June 30, 2020 at Indiana University Hospital in Indianapolis. He was born in Thorntown, Indiana, on June 23, 1935, son of the late Wallace C. and Daisy Lola (Morgan) Wilson.

He was a lifelong resident of Boone County and a 1955 graduate of Thorntown High School. Following high school, he served in the United States Marine Corp. and the National Guard for 13 years during the late 1950s and 1960s.

He was married to Darlene (Toney) Wilson; she survives.

Bobby worked for many years for Coca Cola and Shumate Business Forms. He retired from General Motors in 1991 after 26 years and Witham Toxicology Labs in 2010 after 18 years of employment. He also served 30 years with the Boone County Civil Defense and the Lebanon Auxiliary Police.

Bobby was a devoted husband, father, grandfather, and uncle. He greatly enjoyed spending time with family and friends.

Visitation is planned for Friday, July 3, 2020 from 1:00 to 3:00 p.m. at Myers Mortuary, 1502 North Lebanon Street, in Lebanon, Indiana.
Private Graveside Funeral Services with military rites will be held at Maple Lawn Cemetery in Thorntown, Indiana.

Memorials may be made in his memory to the Indiana Parkinson Foundation, 14350 Mundy Drive # 800, Noblesville, Indiana 46060.