You Are Here:Home>Obituaries>Carl William Marshall 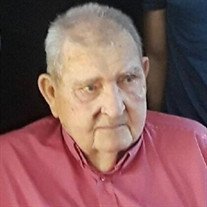 Carl William Marshall, 99, passed away peacefully at home with family by his side on Thursday, May 28, 2020. He was born in Fulton, Missouri on September 23, 1920; a son of the late Lillian and Carl C. Marshall.

He attended high school in Missouri. Carl served his country honorably in the U.S. Army during the battle of Normandy and received a Purple Heart following World War II.

He was married in Fulton, Missouri on July 22, 1939, to Vivian G. (Pruitt) Marshall. They had enjoyed sixty-nine years of marriage together before her passing on November 6, 2008 and.

Carl and his family moved to Lebanon in 1959. He was a box maker for Alton in Lebanon and also for the Indianapolis Paper Container. Carl loved watching WWE and western movies. He enjoyed sitting outside in his yard and was happiest when surrounded by his children and grandchildren.

Many nieces and nephews

In addition to his parents and wife, Carl was preceded in death by three brothers and two sisters.

Memorials: In Lieu of flowers memorials may be made to the Humane Society of Boone County or the Wheeler Mission.