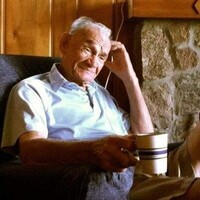 Charles Taylor passed away peacefully on January 23, 2021. He was born Charles Fall Taylor in Boone County, Indiana, on May 16, 1921, to Alfred and Lula Taylor. He grew up on their farm near Dover with his sister, Susan (Taylor) Harris (now deceased). He graduated from Dover School where he played basketball, ran track and developed a life long interest in sports. He briefly attended Indiana Central College in Indianapolis.

He joined the Navy after high school and served on the USS Beale DD471, in 1943 and 1944 in the South Pacific during World War II.  When he returned, he married Jean Taylor (1924 – 2018). They moved to the family farm  where they raised four children. In 1968, Charles retired from farming and went on to pursue a career in public service.

Charles and Jean loved to dance and enjoyed being members of the Elks Clubs and the American Legion. Following their retirement from farming, they lived in Lebanon for 10 years. In 1995, they moved to the Rocky Ridge Golf Club in Darlington, where they lived until 2019. There, Charles indulged his long-time interest in golf, playing in various groups and competitions and acting as a part time course ranger for several years. He was proud of accomplishing three hole-in-ones during his life: two at Rocky Ridge and one at Burnt Store Marina golf course in Punta Gorda, Florida, where they spent several winter months every year. He played golf until just a few years ago. When he could no longer play, he continued to enjoy the game by attending Lebanon High School ladies matches.

His family was a source of love, activity and inspiration. He was able to maintain his independence with the help of great-granddaughter Brianna Rutledge, who lived with him for the last year of his life. Charles is survived by his four children, Charles Taylor, Jr. (Jane) of Lebanon; Penny Taylor Turner (Lyneer) of San Diego; Kathy Smith (Dennis) of Roberts, Illinois and Tom Taylor, (Jan) of Dover. His life was enlivened by his eight grandchildren and 15 great grandchildren. Children, grandchildren and great grandchildren were always welcome in his home and the entire clan often convened in spirited gatherings.  Until the end, he was a vital part of all their lives and was much loved.

A celebration of his life will be held at a future date.