You Are Here:Home>Obituaries>Cleta Faye Bray 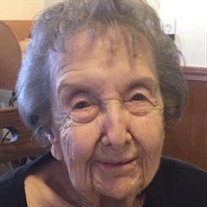 Mrs. Cleta Faye Bray, 96, of Lebanon, Indiana, passed away Monday, June 22, 2020, at Homewood Health Campus in Lebanon. She was born in Boone County, Indiana, on August 3, 1923, a daughter of the late Harrison “Harry” and Dessie (Scott) Pearcy.

Cleta was a graduate of Pinnell High School. She worked as a bookkeeper for various businesses such as, Boone Grain, Martin’s Gas, and Bray’s Heating & Cooling once she and Hilman began their own business.

A longtime member of Concord Baptist Church, Cleta also attended Lebanon Wesleyan Church for many years. She was involved with the Smile-A-While organization as well as the Ladies Aid Society. She enjoyed fishing, playing the piano, singing, cooking and being in her flower garden. Cleta was a devoted and loving wife, mother, and grandmother who enjoyed every moment with her family.

In addition to her parents and her husband, Cleta was preceded in death by a brother, Orel Pearcy; a sister, Mary Nova Kelly; and son-in-law, David Caldwell.

Funeral Services are planned for 2:00 p.m. on Saturday at the funeral home in Lebanon.
Interment will follow services at K of P Cemetery in Lizton.