The first meeting of the year allows the commissioners to reorganize the leadership of the Board with selecting a president and vice-president. Josh Uitts will serve as vice-president.

Speaking after the meeting Commissioner President Brewer talked about what plans and programs he would like to see for Clinton County during the 2022 calendar year.

RadioMom: What are some of the projects/programs you like to see accomplished or shepherd in during the 2022 year?

Commissioner Brewer: I think the big one would be moving forward with the county annex building. That project is not obviously going to be a one-year project and then just the domino effect of that. Once we move people from the courthouse, now we have the courthouse open and a potential renovation here. And then we obviously have the issue with the jail and the upgrading there.

I really have nothing that I plan on do differently. I have taken over from what I thought was a great leader in Josh (Uitts) and I kind of want to continue to move the county forward and focus on all of the positive stuff we’re doing.

I think it gets lost, we have so much to offer here. And, we’re in the unique opportunity because we’re between Lafayette and the Indy Metro area and that Indy Metro area continues to grow everyday.

Although agriculture is our foundation and I want it to continue be our foundation, we have to find that balance of growth and agriculture working together. I think we just have a lot of good opportunities for businesses and people to come to this community.

RadioMom: Will the grandstand at the fairgrounds be done this year? You have done a lot of the foot work on this project.

Commissioner Brewer: That’s the plan. You know from your experience and I’ve learned over the last year-and-a-half that government sometimes works at a slower pace. So, we started working on the project years before I got involved in it – I took the lead in the summer and now we are at the bidding process.

The idea was originally to have it done before the Fair of 2022, I don’t know if that is going to be attainable now just based on bids just went out – or going out this week, we have our time until we can get a bid, accept a bid, and start construction.

We’ve looked at adding other stuff to it as well like electrical. So it is going to be once we get the bid back and the feasibility of all of the stuff we want to do and we can financially handle and see if we might have to split it up over multiple years.

RadioMom: Is the plan still to have restrooms under the grandstands?

Commissioner Brewer: That is the idea if we can afford it. The grandstands will get completely refurbished, give us another 20-to-25-years of life out of those. We will add additional restrooms. We had to get a variance for that because the State code based on the seating was going to require a large number of restrooms that we didn’t need and it was going to be financially prohibitive. So, we were able to get the variance from the State and now we can get it to what the engineers believe we need for the facility.

So, it has had some hurdles like a lot of things do and it hasn’t been a smooth process from the beginning. We’ve had different hurdles we have had to overcome and it has extended our timeline. 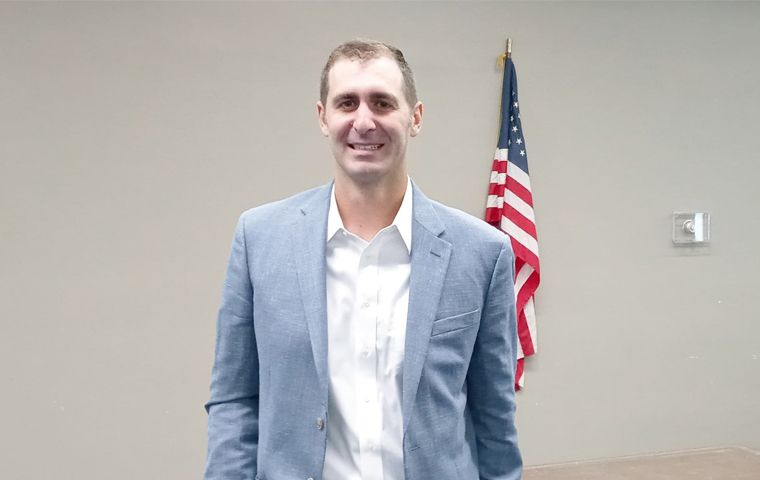 Commissioner Jordan Brewer in a file photo from July 25, 2020, after winning the Clinton County Republican caucus for District 3 County Commissioner to fill the vacant seat. (Photo by Brett W. Todd)