FRANKFORT, Ind. – The Clinton County Commissioners voted 3-0 at its Monday, December 27 meeting to fire Jail Matron Ashley Kelly due to a violation of the County’s nepotism policy, identified by the State Board of Accounts audit released November 23rd, unless Matron Kelly signs a contract by January 3, 2022, to continue her work as a Jail Administrator reporting directly to the County Commissioners. Jail Matron Kelly and Sheriff Rich Kelly are husband and wife.

The motion made by Commissioner Jordan Brewer to terminate Matron Kelly came after Commissioner Josh Uitts addressed Sheriff Kelly that a “non-negotiable” contract has been transmitted to the Sheriff’s attorney for consideration.

A contract that Sheriff Kelly calls “take it or leave it.”

Commissioner Uitts described the action as a way for the “sheriff’s Matron Kelly to continue as a consultant and perform the same duties. That way was one way around the nepotism law was to hire her as a contractor as opposed to an employee.”

RadioMom obtained a copy of the contract in question that confirms the Commissioners are removing the direct supervision of Matron Kelly from the sheriff, but also contains a provision that should Sheriff Kelly fulfill a statutory right provided under Indiana law – to appoint a Jail Matron, the Commissioner’s contract with his wife will automatically be voided, “should the Sheriff hire another person as Jail Matron, the Administrator position shall be automatically VOIDED. …”

Sheriff Kelly addressed his concerns of how the three-person Board of Commissioners were moving to resolve the nepotism issue, an issue the sheriff claims does not exist as an Indiana statute states a sheriff can appoint his wife as matron unless the local legislative body (commissioners) enacts a policy that contains more stringent or detailed provision(s) than the minimum standards the State’s nepotism law addresses.

“It’s one of those things where they (commissioners) don’t have the authority to step in there and remove anybody,” said Sheriff Kelly afterwards. “I believe in the courts and a state statute that gives the proper ability for the sheriff to appoint his appointees.”

“The sad thing is all of the work and due-diligence she has done that has provided this community of millions of dollars of relief, this county’s commissioners and council could care less about what has been provided to this community. These people want just what they want – and that is absolute control.”

Commissioner Uitts was asked after the meeting how the actions just taken by the commissioners might conflict with the October 12 court ruling from Special Judge Sam Swaim of Parke County finding the commissioners had “exceed its authority” over Sheriff Kelly’s right to make available for purchase and use of e-cigarettes and nicotine pouches that do not contain tobacco products to inmates within the confines of the Clinton County Jail.

Judge Swaim’s decision included Indiana appeals court cases and added the following to his decision, “Not only does the Board (commissioners) have no duty to administer the jail, it has no control of the actions of the Sheriff or his officers at all.” Judge Swaim also added from one of the appeal court cases, “The law is well-settled that county commissioners do not have control over the acts of a sheriff.”

“The rulings are in our opinion are not correct,” commented Commissioner Uitts. “We haven’t, not one time, have we said what can you and cannot you sell. What we said was ‘you are not going to use those products in a county building.’”

“So, Judge Swaim was mistaken in his ruling – I think we will end up in appeals court with that, where we will have a panel of three judges who can take a clear look at this. We asked to correct mistakes and he wouldn’t even listen.” (Judge Swaim denied the motion to correct errors on December 16.)

While Sheriff Kelly insists the county has gone too far in its reach. The county claims they have taken such steps to have a more stringent nepotism policy and point to the SBOA audit findings as proof.

A review of the SBOA audit finds a reply from Sheriff Kelly’s attorney, Tonya Boyd, stating the Kelly’s had disclosed the conflict with County Attorney Tom Little as early as November 2018 when discussing preliminary matters. Sheriff Kelly took office January 1, 2019.

Boyd identified the following four matters:
1. Appointing Sheriff Kelly’s wife, Ashley Kelly, as Matron;
2. Ashley Kelly serving as the Commissary Manager under the same terms as the previous Sheriff’s wife, Nancy Ward, so that Mr. Little could prepare the contract as he did for Sheriff Ward;
3. The Clinton County’s nepotism policy; and
4. Submission of the conflict disclosure required based on Ms. Kelly working with the Sheriff’s Office as Matron and as Commissary Manager.

Boyd continues:
“The Kellys were led to believe they could rely on Mr. Little’s guidance on these preliminary matters. As an example, Mr. Little requested Sheriff-elect Kelly’s home address to include on the conflict disclosure form.”

Boyd then addressed the county nepotism policy:
“With regard to the Clinton County Nepotism Policy found in the Clinton County Handbook, it does not apply to this situation. The policy does not address appointed positions or third-party contractors, which are the capacities in which Ms. Kelly served.”

“The policy states, ‘Employed means an individual who is employed by the County on a full time, part time, temporary, intermittent, or hourly basis. The term does not include an individual who holds only an elected office. The term includes an employee who is a party to an employment contract with the County.’”

“Because the Matron position is appointed and the Commissary Manager is a third-party contractor, these positions do not meet the County’s definition.”

“For example, the County is not responsible for maintaining Ms. Kelly’s position as Matron once Sheriff Kelly leaves office because that is an appointed position. Even though neither Sheriff Kelly nor Ashley Kelly were ‘applicants,’ they were asked by the Auditor’s office to sign several new-hire forms, including the County’s ‘Verification of Applicant for Employment for Compliance with the Clinton County Nepotism Policy.’ They should not have been asked to sign these verifications.”

Commissioner Uitts provided RadioMom with a copy of the county’s Nepotism Ordinance dated June 18, 2012, in response to an inquiry as to whether there exists other potential nepotism issues elsewhere in county government. In the specific instance, a county department head is in direct supervision of a family member.

Commissioner Uitts acknowledged it is the Board of Commissioner who is responsible for the Clinton County Employee Handbook, updating and approving changes, and both the SBOA as well as the County point to the Clinton County Employee Handbook with an effective date of January 1, 2019, as the base for a claim of nepotism along with the respective Indiana law.

Commissioner Uitts commented on the January 1, 2019, date on the handbook, “I think that is the last time we updated it. That is why that date was on there.” He also pointed out the nepotism portion of the employee handbook was already part of the handbook prior to January 1, 2019.

Upon review of the provided June 18, 2012, Nepotism Ordinance, differences are noticeable when compared with the January 1, 2019, Clinton County Employee Handbook. As noted above, Commissioner Uitts provided the ordinance to RadioMom and acknowledged the Board Commissioners are responsible for all changes and approvals.

RadioMom has taken the step to retrieve from the State of Indiana Gateway 100R reporting system the most recent Clinton County Nepotism Policy. The Policy retrieved and the one provided by Commissioner Uitts match. Any change to the Nepotism Policy must be loaded to the 100R portal by January 31 of the following year according to state policy.

The differences between the 2012 Nepotism Ordinance and the January 1, 2019, Clinton County Employee Handbook (page 10) are identified below – items in bold are unique to the Handbook, but not found in the Ordinance:

“Employees who are relatives of an Elected Official or Department Head may not be employed by the County in a position that results in one (1) relative being in the direct line of supervision of the other relative.”

“Direct line of supervision means an Elected Official or Department Head who is in a position to affect the terms and conditions of another individual’s employment, including making decisions about work assignments, compensation, grievances, advancement, or performance evaluation. The term does not include the responsibilities of the executive, legislative body, or fiscal body of the County, as provided by law, to make decisions regarding salary ordinances, budgets, or personnel policies of the County.”

“Relative means any of the following: (1) A spouse, (2) A parent or stepparent, (3) A child or stepchild, (4) A brother, sister, half-brother, half-sister, stepbrother, or stepsister, (5) A niece or nephew, (6) An aunt or uncle, (7) A daughter-in-law or son-inlaw. An adopted child is considered the same as natural child of the individual.”

“This policy does not apply to employees in their current position as of June 30, 2012 unless the employee has a break in employment.”

The SBOA audit referenced the above Clinton County Employee Handbook (January 1, 2019)  Nepotism paragraphs and used it in making the following statement:

“It is our audit position that the payments to Leonne and Ashley Kelly violated the County’s nepotism policy under the Clinton County Employee Handbook, effective as of January 1, 2019…”

“Funds misappropriated, diverted or unaccounted for through malfeasance, misfeasance, or nonfeasance in office of any official or employee may be the personal obligation of the responsible official or employee. (Accounting and Uniform Compliance Guidelines Manual for Counties of Indiana, Chapter 1)”

RadioMom will continue to investigate what potential significance exists in the difference between the contents of the 2012 Nepotism Ordinance and Employee Handbook of January 1, 2019.

There still remains one court case active between the County and Sheriff’ Kelly in Tippecanoe County. Oral arguments are set for February 23, 2022, at 1:30.

The next Board of Commissioners meeting is January 3, 2022, at 9:00 am in the Clinton Courthouse. 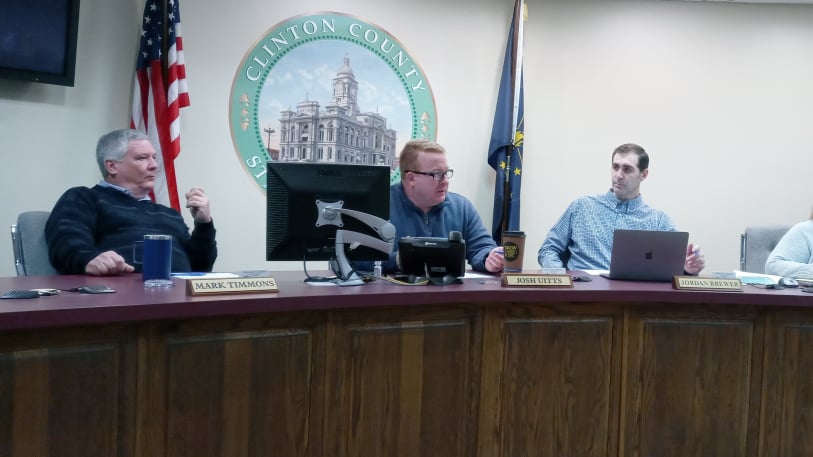