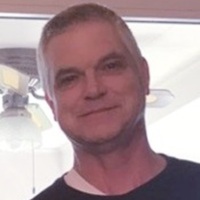 Dan attended Central Elementary School and graduated from Lebanon High School in 1979 and from Lincoln Technical Institute, where he studied to be an electrician. Dan owned and operated Davis Electric in Lebanon for many years. He worked as a licensed electrician in residential and commercial settings throughout Boone and surrounding counties.

For over 25 years, Dan was an avid Ham radio operator, where he met and maintained contact with many friends and acquaintances. He was a collector of Ham radio equipment and greatly enjoyed spending hours talking with other operators. Dan was also adept at household repairs and fixing small appliances. He could be counted on by friends and family to keep things running.

Dan loved his family and was eager to assist in any way possible. During his parents’ later years, he attended appointments with them and helped with their grocery shopping and meal preparation. He was very fond of his brother’s dog, Jackson, and often cared for him when they traveled. Spending time with family and friends was a priority for him throughout his life.

Dan remained a loving son, brother, and uncle. He was preceded in death by his parents, James and Sue Davis; as well as grandparents, Ransom and Lillian Davis and William and Elsie Sesler. Dan is survived by a brother, Gary (Ann) Davis of Lebanon; a nephew, Zachary (Maili) Davis of Lebanon; a niece, Allyson Davis of Indianapolis; as well as a cousin, Randy (Stephanie) Davis of Borneo, Malaysia and their daughters, Samantha and Cassandra.

A private family funeral service will be held at a later date. Final care of Dan has been entrusted to the Strawmyer & Drury Mortuary, 2400 N. Lebanon Street, Lebanon.