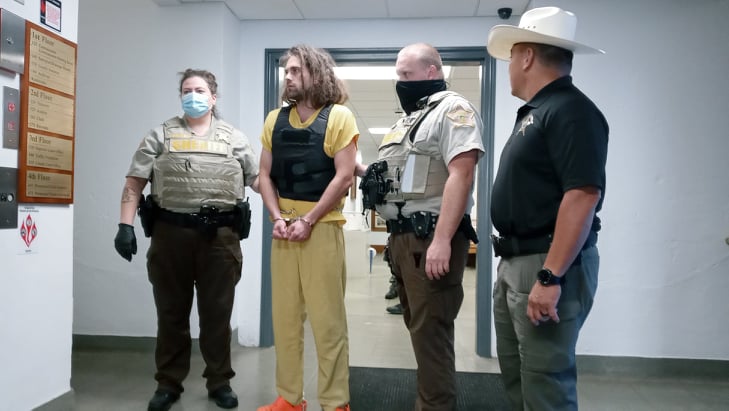 Defendant Gary C. Ferrell II is being led into an elevator at the Clinton County Courthouse on Friday for his preliminary hearing. Ferrell is facing the death penalty for the double murder of Promise Mays and Pamela Sledd on Tuesday, August 18 at the NHK Seating of America plant outside of Frankfort, IN. (Photo by Brett W. Todd)

FRANKFORT, Ind. – Gary C. Ferrell II will face the death penalty in the Tuesday killing of Promise Mays and Pamela Sledd in the parking lot of NHK Seating of America outside of Frankfort.

A total of five charges were read aloud by Clinton County Superior Court Judge Justin Hunter during the nearly 23-minute long preliminary hearing held Friday morning at the Clinton County Courthouse; two counts of murder, criminal confinement while armed with a deadly weapon, resisting law enforcement using a vehicle, and carrying a handgun without a license.

Judge Hunter informed Ferrell the State of Indiana has filed a notice of intent to seek an enhanced death penalty on both charges of murder.

Clinton County Prosecutor Anthony Sommer spoke after the proceeding about why the death penalty has been sought.

Sommer states Ferrell’s use of a handgun qualifies as confinement under the law in this case.

“Confinement has to do with either removing or restraining someone’s movement against their will,” continued Sommer. “And in this particular case, that was done with a deadly weapon – specifically a handgun.”

The State also filed a probable cause affidavit Friday outlining the details of the double murder.

The Court document states security video provided by NHK reveal Ferrell’s blue Focus was parked next to a black Chevrolet in which Mays was a passenger. Ferrell opened the trunk of his car then “exits his vehicle with a black object in his right hand that appears to be a semi-automatic firearm.” He then walked to the passenger door of the black Chevrolet, opened the door, “forcibly pulls” Mays by grabbing her arm, and “pulls her to the rear of the blue Ford.” Mays attempts to resist but is “over powered.”

Sledd exits the driver side of the black Chevrolet and has “an exchange of words” with Ferrell prior to him making a “pointing motion with the firearm towards the NHK building.” Sledd attempts to “move away from the scene” and “appears she is shot when Ferrell lowers the gun” at Sledd. She continues to “move away” from Ferrell and the video appears to show “that a second and third round are shot” at Sledd and she “collapses on the ground.”

Mays is now in a “crouched type position” behind the blue Focus. Ferrell has his gun pointed at Mays’ “head and is still trying to force Promise into the trunk of his vehicle.”

“Ferrell then appears to shoot Promise and then she falls to the ground behind the Ford Focus and lies motionless.” He then enters his vehicle leaving the trunk open and “after a few seconds the vehicle backs up and runs over Promise and comes to a rest after turning about 90 degrees. Promise’s body is drug about 7 feet and the car stops and then goes forward, leaving the parking lot.”

The affidavit also provided detail of how Ferrell was apprehended after crashing in the State Road 28 construction site.

“The vehicle swerved in and out of traffic in its attempt to evade Deputy (Dennis) Tillman until it crashed with another motorist. Deputy Tillman immediately exited and yelled numerous times for the subject to get out of the car and to show his hands. The male driver at that time lit a cigarette and exited the vehicle slowly complying with lawful orders.”

Ferrell is held in the Clinton County jail without bond awaiting trial. Judge Hunter approved Ferrell’s request for a court-appointed attorney to handle his case. Due to the case involving the death penalty, Ferrell will be appointed two attorneys to handle his case.