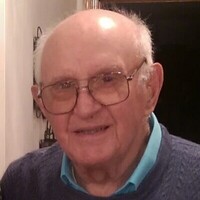 Devon was born April 29, 1930, in Crawfordsville, a son of the late Leonard and Della (Smith) Woody. He married Rovene Barrett Woody on July 31, 1953. She died in May of this year.

Devon graduated from Thorntown High School in 1949. He then went on to serve in the U.S. Army during the Korean conflict. Devon was involved in his community as a farmer, also owning Woody Farm Repair. He was also an auctioneer. Devon was a member of Countryside Christian Fellowship. He always enjoyed spending time with his grandchildren and attending their events.

Family and friends will gather Monday, Jan 4, 2021, for visitation from 11 a.m. until the time of the funeral service at 1 p.m. in the Strawmyer & Drury Mortuary, 2400 N. Lebanon Street, Lebanon. Due to public health concern, CDC guidelines will be followed for social distancing. Those attending are encouraged to wear a mask and follow precautions. Devon will be laid to rest at Maple Lawn Cemetery in Thorntown. You are invited to visit the website www.strawmyerdrury.com where you may sign his online register and leave a personal message.