You Are Here:Home>Obituaries>Dr. William H. Allen 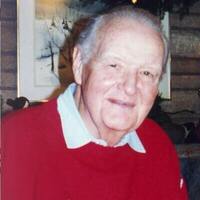 William “Bill” Allen was born on Sep. 29, 1926, in Chicago, IL. He grew up in Lexington, KY and played basketball for UK under Adolph Rupp. He also played minor league baseball before going into the Navy. He and Sarah Elva Bach were married until her death, 62 years later. They moved to Rochester, NY where he attended Medical School, then on to Richmond, VA for residency, and completed his training in Neurosurgery in Chicago.

After practicing in Detroit and Terre Haute, he and Elva settled in Evansville, where he was a revered Neurosurgeon for over 30 years before retiring.  It was there they raised their family. Bill regaled everyone with his stream of jokes and blessed all who heard his beautiful tenor voice.  He loved to sing and spread laughter and was known as ‘Wild Bill” by the many who knew and loved him.

Family and friends will gather Tuesday, Dec. 28, for the funeral service at 11 a.m. at Milward- Downtown, 159 N Broadway, Lexington, KY 40507.  Bill will be laid to rest at Lexington Cemetery.

Final care of Bill has been entrusted to the Strawmyer & Drury Mortuary, 2400 N. Lebanon Street, Lebanon, IN. You are invited to visit the website where you may sign his online register and leave a personal message at www.strawmyerdrury.com.