You Are Here:Home>Obituaries>Elsie C. Bevington 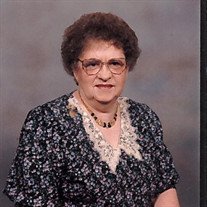 Mrs. Elsie C. Bevington, 96, passed away on March 18, 2021 at Signature Healthcare at Parkwood in Lebanon. She was born on November 20, 1924 in Jennings County, Indiana; a daughter of the late Samuel David and Mary Catherine (Price) Eberwein.

Elsie rarely missed a day of work at Shumates in Lebanon, where she retired from as a production clerk.

She was longtime member of Walnut Street Baptist Church. Later she was a faithful member of Grace Baptist Church where she was very active in the Awana’s club. In addition to loving her family she enjoyed bowling and loved being in the “Red Hat” society, in which red happened to be her favorite color.