You Are Here:Home>Obituaries>Eugene Lee Lewellen 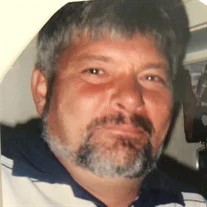 Raised in Boone County, Gene was a 1978 graduate of Western Boone High School. Following school, he served his country honorably in the United States Marine Corp.

On October 4, 1980, he was married to Cheryl Dunbar in Lebanon; they later divorced.

Gene was a self-employed contractor operating under the name Lewellen’s Remodeling. He built many recognizable buildings throughout Lebanon, including the gazebo at Memorial Park and a building at Abner Longley Park.

He was a big NASCAR fan and loved the outdoors. An outgoing personality, Gene never met a stranger. He was a longtime member of the Eagles Club in Lebanon where he served as a trustee for many years.

In addition to his mother, Eugene was preceded in death by a brother, Leon Lewellen.

Visitation will be held from 1:00 to 3:00 p.m. on Friday, November 27, 2020, at Myers Mortuary, 1502 North Lebanon Street, in Lebanon, Indiana.
No services will be held.
Boone County Crematory has been entrusted with his cremation following visitation.