You Are Here:Home>RadioMom Local News>Fire Fatality In Canterbury Apartments – Update 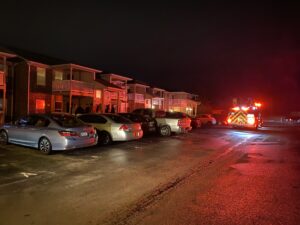 On the evening of February 21st, 2022 at approximately 7:17 PM Lebanon Fire Department crews were dispatched to 1811 Sprucewood Dr. in Lebanon on a reported cardiac arrest. Lebanon Police responded to the scene as well and upon their arrival reported smoke coming from the residence. The call was upgraded at that time and additional units were requested to assist with a possible structure fire.
Upon arrival Lebanon Fire crews made entry into the structure and confirmed that there had been a fire, but it was out at that time. A victim was located in the structure but unfortunately did not survive. The victim has been identified as Susan Hayes 74-year-old female of Lebanon. In addition, several cats and a dog were also located in the structure but were not able to be saved.
Lebanon Fire Department investigators and Lebanon Police Department detectives were requested at the scene to conduct an origin and cause investigation. The investigation remains open at this time. Once investigators have completed their investigation, additional information will be released. Assisting agencies for this event were Lebanon Police Department with patrol officers, detectives,
and chaplain services, Boone County EMS, Whitestown Fire Department, the Boone County Coroner’s office, and the Salvation Army of Boone County.

The Boone County Coroner’s Office issued the following statement: “Today, the Coroner’s Office conducted an autopsy to determine the manner and mechanism of death. Through this investigation, our forensic pathologist determined that the victim died as the result of a medical emergency prior to the fire. The fire did not contribute in this death. As of today, the medical investigation into the death continues and is pending further testing. At this time in the investigation, no foul play is suspected.”