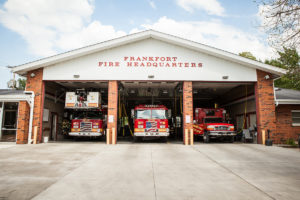 According to Lt. Cesar Munoz with Frankfort police, crews were called to Werner and Son Recycling Plant about 4:30 a.m. Monday. The plant is located on the north side of downtown on Kyger Street between Rossville Avenue and John Street. The road is currently closed. The fire spread to The Storage Place Office next door, and about 7:10 a.m. that building collapsed. No injuries were reported before the collapse.  Frankfort fire and police, Lebanon fire, American Red Cross, Clinton County EMS and power crews are all on the scene. Due to the fire at Werner & Son, recycling in the city of Frankfort will not be recycling on Wednesday July 31st.