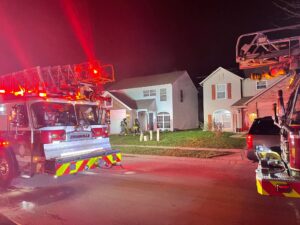 Photo from the Zionsville Fire department.

At 1:24 this morning, the Boone County Communications Center received a 911 call reporting of a house fire at 6747 Wimbledon Drive in Zionsville. Zionsville Fire Department crews arrived to find smoke and fire coming from the rear of the two-story residence. Crews immediately initiated an offensive attack, and the fire was under control in less than 30 minutes.

One person was home at the time of the fire and was alerted by smoke alarms going off and jumped from a second-story window prior to the fire department arriving and was transported to a local hospital for non-life-threatening injuries. There were no injuries to firefighters.
Preliminary damage estimates for the building and contents may exceed $75,000.
The cause of the fire is currently under investigation.