You Are Here:Home>RadioMom Local News>Frankfort Man Arrested After Released From Hospital 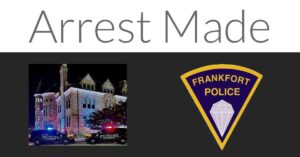 On February 22, 2022, at 7:46 PM, Frankfort Police were dispatched to a report of a male breaking windows to a residence in the 400 Block of west Barner Street. Officers were advised that one of the residents was armed with a firearm and was outside fighting with the male. At least one shot had been fired according to the caller.
FPD officers arrived and found an intoxicated 34-year-old male, Clayton Tamayo of Frankfort, Attempts were made to provide medical aid as well as take him into custody. He resisted those efforts. After a very brief struggle with officers, he was taken into custody. Injuries were unknown at the time but were later learned to be superficial graze-type injury caused by a passing bullet.
Tamayo was transported to IU Arnett in Lafayette and then taken to the Clinton County Jail by FPD officers. Detectives are still investigating the case. An Indiana State Police Crime Scene Investigator assisted. Once complete, the report will be sent to the Clinton County Prosecutor’s Office.