You Are Here:Home>Obituaries>Hurchel L. Biddle 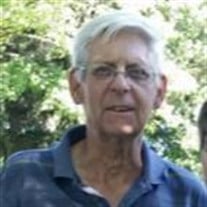 Mr. Hurchel Lee Biddle, 76, passed away Saturday morning, January 22, 2022, at home in Lebanon, Indiana, with his loving family by his side. He was born May 26, 1945, in Elwood, Indiana, a son of the late Nellie Maude (VanBriggle) and Galen Eugene Biddle, Sr. He is survived by his wife of 50 years, Lois (Engle) Biddle.
Hurchel grew up in Cloverdale, Indiana, and later moved to Dover where he graduated. He was a Vietnam Veteran serving his country as an engineer in the United States Army. He worked as a mechanic for many years until his health moved his path in a different direction. Hurchel then was the greenskeeper for Fairway Golf Course until he retired. He had a passion for the game of golf and all the friends he made.
He loved playing music, watching sports, fishing, bowling, woodworking, doing puzzles, reading, and spending time with his family.
He is survived by his wife, Lois; two brothers, Andy (Joyce) Biddle of Lebanon and George Biddle of Kirklin; daughters all of Lebanon, Lois (Brad) Krout, Lora (Bill) Wirick, and Michele Ramirez; eight grandchildren, Bianca Krout, Bill Wirick, Jr., Hurchel Wirick, Bailey Wirick, Juan Ramirez, Shawn Ramirez (fiancé, Michaela Dale), Suzanna (Jerrod) Williams, and Kaylee Ramirez (fiancé, Brandon Nicholson); four great grandchildren, Aubrey, Waylon, Gracie Wirick, and Daniel Williams. Also survive many nieces and nephews that he adored.
In addition to his parents, Hurchel was preceded in death by a brother, Galen Biddle, Jr., sisters, Silvia Biddle and Frances Sanders; and two grandsons, Bryan Krout and Jonathan Ramirez.
Visitation is planned from 4:30 to 8:00 p.m. on Thursday, January 27, 2022, at Myers Mortuary, 1502 North Lebanon Street, in Lebanon, Indiana.
Funeral Services with military rites will be held at 10:00 a.m. on Friday, January 28, 2022, at the funeral home in Lebanon.
Interment will follow at Lincoln Memory Garden in Whitestown.
Memorials may be directed to Boone County Cancer Society, 117 West Elm Street, Lebanon, Indiana 46052.