You Are Here:Home>Obituaries>Jack Henry Anderson 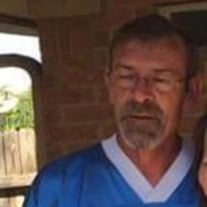 Jack Henry Anderson, 58, passed away at his home in Lebanon, Indiana on Sunday, December 12, 2021, with his loving family by his side. He was born in California on May 14, 1963; a son of the late Robert J. and Joan Olive (Wearing) Anderson.

He graduated from high school in California. On October 8, 2016 in Denton, Texas he was married to Sharri L. (Essex) Anderson; she survives. He served his country honorably in the U.S. Air Force.

Jack was an Avionics Technician for many years. He was a loving husband, dad and grandpa. He enjoyed restoring old cars, especially “Old Red” his 1966 F100, and tinkering in his garage.

In addition to his parents, Jack was preceded in death by one sister, Susan Walton.

A Celebration of Life will be held at a later date. Memorials may be given in his honor to Paradigm Hospice, 8904 Bash Street, Suite B, Indianapolis, IN 46256. Flowers or cards may be sent to the home of Jack Anderson.

Myers Mortuary and Boone County Crematory of Lebanon are handling his arrangements for cremation.