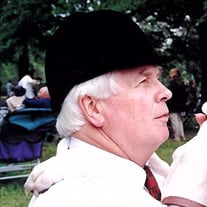 James Clifford “Jim” Eklins, 80, passed away at Riverview Health in Noblesville, Indiana on Sunday, December 12, 2021. He was born in Indianapolis, Indiana on March 5, 1941; a son of the late Clifford Eugene and Mildred LaVerne (Shephard) Elkins.

He was a graduate of Brownsburg High School. Following high school, he graduated with a degree in Civil Engineering and received a master’s degree in business administration both from Purdue University.

In the fall of 1970, he married Sara Jane (Rees) Elkins; she survives, and they shared 51 loving years of marriage.

The length of Jim’s career with Eli Lilly of Indianapolis was dedicated to utilizing his various degrees in engineering and law.

He was always up for a good round of golf and playing Bridge with the guys. His love of horses led him to the sport of fox hunting for twenty years in Virginia, where he became The Master of the local hunt. Jim was very dedicated to his career, who was also very caring and deeply devoted to his family.

In addition to his parents, Jim was preceded in death by a brother, Bill Elkins.

In honor of Jim’s wishes no services will be held. Boone County Crematory has been entrusted with his care. Memorials may be made in his memory to the charity of the donor’s choice.