You Are Here:Home>Obituaries>Joann Helen Gates 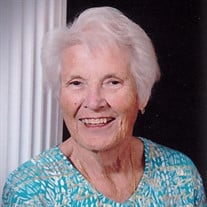 Mrs. Joann Helen Runyon Gates, 86, passed away peacefully in her sleep on New Years Day, January 1, 2022, at Homewood Health Campus in Lebanon, Indiana. She moved from Lebanon to Melbourne Beach, Florida with her husband, Bill, in 1977. She was born October 1, 1935 in Crawfordsville, Indiana, a daughter of the late Harold and Helen Runyon and graduated from Brownsburg High School.

In 1954, she married Bill Gates and celebrated 61 years of marriage. Bill and Joann lived on a farm in Boone County, both lovingly raising 5 children in Lebanon before moving to Melbourne Beach, Florida in 1977.

As a farmer’s wife for many years Joann spent time gardening, canning, and making homemade noodles. She was a member of St. Joseph Roman Catholic Church in Lebanon and Immaculate Conception Catholic Church in Melbourne Beach. She loved to cook, sew, and knit. During her time at ORA (Outdoor Resorts of America) she remained active through painting, Bridge, Euchre, crafts, etc. Joann also loved going to Disney World with her grandchildren as she found joy through spending time with her family.

She was a wonderful mom, a caring grandmother, a loving wife and so much more for all those fortunate enough to know her. Joann was married to Bill Gates, who passed away in 2015.

In addition to her parents and her husband, Joann was preceded in death by 2 brothers, Ted Runyon and Ronnie Runyon; 3 sisters, Theresa Davidson, Shirley Priest and Jackie Hession; and 2 grandsons, Grant and Derk Gates.

Visitation will be held on January 7 from 9:00 a.m. until the time of service at the church in Lebanon with the Rosary beginning at 8:30 a.m. Burial of Ashes will immediately follow services at Oak Hill Cemetery in Lebanon.

Myers Mortuary and Boone County Crematory have been entrusted with her arrangements. Memorials may be made to St. Joseph Catholic Church in Lebanon.