You Are Here:Home>Obituaries>John K. Maiden 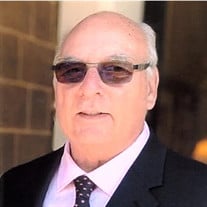 John K. Maiden, 67, of Normal, Illinois, passed away on November 23, 2021, at Springfield Memorial Hospital in Springfield, Illinois. He was born February 10, 1954, in Lebanon, Indiana, a son of the late John W. and Mary Jane (Crouch) Maiden.

Raised in Boone County, Indiana, John was a 1972 graduate of Thorntown High School. He and Beth lived in Lafayette, Indiana for a few years prior to moving to Chalmers, Indiana. In 1999, they moved to Normal, Illinois where he had since resided. He had worked as systems security analyst for State Farm Insurance Company, retiring after 40 years of service.

He was an avid fan of NASCAR and Indy Car. John enjoyed golfing, music, and dancing. Above all, he was a devoted father and papaw who loved his family and adored his grandchildren.

Funeral Services are planned for 1:00 p.m., Saturday, December 4, 2021, at Myers Mortuary, 1502 North Lebanon Street in Lebanon, with visitation from 10:00 a.m. until time of the service.
Interment will follow services at Ladoga Cemetery in Ladoga, Indiana.