You Are Here:Home>Obituaries>John William Hicks 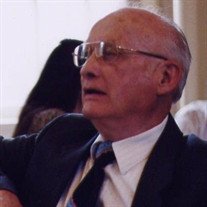 John served his country honorably as a sergeant in the U.S. Army during WWII. After the war he returned to complete high school and graduated from Lebanon High School in 1948. He attended Butler University. He was a member of First Baptist Church of Lebanon.

John worked for 29 years at Stewart Warner until its closing. He then worked at Lau Industries retiring in 1992. He was an avid bowler for over 48 years and served as league secretary for 30 years. He was a member of the Bowlers Hall of Fame. His membership included the American Legion Post 113 where he served as finance officer and VFW Post 910.

In addition to his parents and his wife, John was preceded in death by three brothers, Robert E. Hicks, Roland Hicks, and Jesse P. Hicks; three sisters, Mary J. Haney, Rose Lewallen, and Jacqueline Crane; and a son-in-law, Steven Garman.

Graveside services are planned for April 24, 2021 at 1 p.m. at Oak Hill Cemetery in Lebanon. Myers Mortuary and Boone County Crematory have been entrusted with his cremation arrangements.

Memorial contributions may be made to the First Baptist Church or Charity of the donor’s choice.