You Are Here:Home>Obituaries>Judith Lynn Klemme 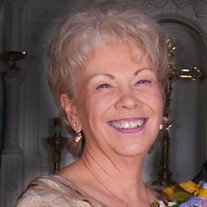 Mrs. Judith Lynn Klemme, 74, of Lebanon, Indiana, passed away early Friday morning, July 3, 2020 at her home in Lebanon. She was born April 26, 1946 in Lebanon, the daughter of the late Franklin Paul and Ruby Lynn (Cox) Oliphant.

A lifelong resident of Lebanon, Judy was a 1964 graduate of Lebanon High School.

On October 31, 1965, she was married to Joseph Dean Klemme at the St. Joseph Catholic Church in Lebanon; he survives. They had shared 54 wonderful years together.

Judy and Joe owned Klemme’s Kountry Nursery and Klemme’s Klip Shop. They had retired and just moved into town recently. The family barbershop was handed down to their son, Kirk.

She was a faithful member of St. Joseph Catholic Church and a devoted wife, mother, grandmother, and homemaker. Judy was a talented seamstress in her early days, making clothes for her children among other things. She loved volunteering at Green Tree Assisted Living where she assisted the Activity Director with fun events for the residents. She and Joe enjoyed their life together. They volunteered many years with The Caring Center in Lebanon and had fun entertaining at local nursing homes as part of the Top of the Hill Band.

In addition to her parents, Judy was preceded in death by a sister-in-law, Charlotte Oliphant.

A Celebration of Life will be held privately at a later date.
Myers Mortuary and Boone County Crematory have been entrusted with her cremation arrangements.