You Are Here:Home>RadioMom Local News>Kanaan: This Year Isn’t Goodbye At Indy

When Tony Kanaan, the 2013 Indianapolis 500 presented by Gainbridge winner, announced in January he would step away from the NTT INDYCAR SERIES as a primary driver, dubbing his full-time departure from racing “TK Last Lap,” it was never truly meant to be a goodbye.

Kanaan’s five-race stint on the oval tracks of the NTT INDYCAR SERIES schedule this season was the popular Brazilian’s way of thanking his large, dedicated fan base for supporting him over the last 23 years.

Not a retirement tour. Not a “See ya later!” Just a thank you.

“I’m not going anywhere,” Kanaan said. “I’m just saying that I don’t think you guys are going to see me doing a full season again. If you go back to my interview at the beginning of the year, I called it my last lap. I’m slowing it down. That confused people because I’m not doing a full season.”

Yes, Kanaan still plans to continue racing. After a season defined by the COVID-19 pandemic, which has kept race fans away from many racetracks, including the Indianapolis Motor Speedway, Kanaan wants a chance to do this right.

“To be honest, after this year, I think anybody is allowed to change their mind, because when I announced ‘TK Last Lap,’ it was to enjoy it with the fans at the racetrack and have a good time with them and so on, and that didn’t happen,” Kanaan said. “I want to pay back my fans and friends and INDYCAR what made me. This is not a proper way to go.

“I will rethink and re-evaluate my opportunities and chances, as well, because obviously there aren’t many out there. It’s such a competitive series, and we have such a great group of young kids that deserve a ride. Look who we have as young guns this year. We’ll see, but I am rethinking maybe to do the ‘TK Last Last Lap.’”

Kanaan’s original plan for the “TK Last Lap” would have started at the Indy 500 in May and taken him to Texas Motor Speedway, Richmond Raceway, Iowa Speedway and World Wide Technology Raceway, but a delayed start to the 2020 NTT INDYCAR SERIES season due to the COVID-19 pandemic gave Kanaan the opportunity to run in the season opener June 6 at Texas.

Starting the year with the rest of the field, instead of waiting until the sixth race of the season before running his first race, allowed 2004 series champion Kanaan to extend his INDYCAR record for the most consecutive starts to 318. Kanaan sits well ahead of Scott Dixon, who is second on the all-time consecutive starts list with 264 consecutive starts.

Kanaan finished 10th in the No. 14 7-ELEVEN / AJ FOYT RACING Chevrolet on the 1.5-mile oval, which featured a throwback green-and-white livery honoring his early INDYCAR days in the 7-Eleven machine.

Kanaan finished 18th in the Iowa INDYCAR 250s Race 1 at Iowa Speedway on July 18 after issues early in the race set him back. He followed the next night with an 11th-place finish on the .875-mile tri-oval in his most-recent race.

The 45-year-old Brazilian said a silver lining to the altered 2020 schedule is that he heads into the 104th Indianapolis 500 with seat time and experience with the new Aeroscreen, as opposed to having no track time when arriving to the Racing Capital of the World. That and the improved performance of A.J. Foyt Enterprises this season has Kanaan eagerly anticipating this month’s race, which can be seen live on NBC starting at 1 p.m. (ET) Sunday, Aug. 23. 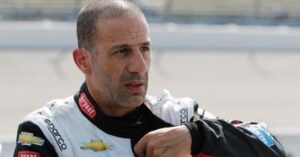 “I’m actually extremely confident,” he said. “If you watch the races I’ve done, we’ve been running in the top 10 in all of them, so it’s very promising. We’re doing a lot better than last year. I really can’t wait. One of the most competitive races that I did with Foyt the past two years were on the ovals, and actually at the Indy 500. I can’t wait.”

Aside from the performance of the team, it’s easy to see why Kanaan is excited to get “The Greatest Spectacle in Racing” underway. He is a statistical gold mine at Indianapolis.

Additionally, Kanaan holds several records at IMS that will take time to be broken. He holds the record for the most times led in a driver’s career with 52, and he has led the most races in history at 14 – including a record seven consecutive races from 2002-08.

“I don’t know if it’s the type of track, being a superspeedway or the way the corners are, it just really suits my style, and I love the place,” Kanaan said. “It’s cliché to say you love the place, because every race car driver loves the place, but I think it’s really the way the track is. We just clicked from day one. Either you have it, or you don’t. I consider myself extremely lucky that I clicked and that I’m pretty good at the best place on Earth and the race that really matters to everybody.”

Kanaan’s love for Indianapolis dates to when he was a 6-year-old boy watching the largest single-day sporting event in the world in awe. He even remembers with vivid detail his favorite Indy 500 moment growing up: Emerson Fittipaldi and Al Unser Jr. making contact in Turn 3 coming to the white flag in the 1989 Indianapolis 500.

It’s memories like that, from the early 1980s as a child to the mid-2010s as a winner and everything in between, that make Kanaan certain that the Indianapolis 500 will remain a part of his future. One day, this year or the next when the “TK Last Lap” is complete, the fan-favorite driver said he will still return to Indy looking to kiss the bricks yet again.

“That’s my idea,” he said. “Obviously, the Indy 500 will be my priority, and the two weeks of the ‘500’ will be available, they’re never going to be blocked, and nothing is going to take place. The goal will be for the next two or three years probably to come back and do the race.”