You Are Here:Home>RadioMom Local News>L.H.S. Presents ‘Diary Of Anne Frank 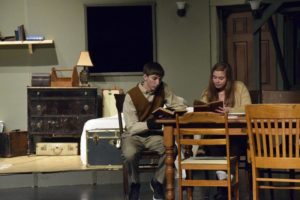 Lebanon High School is presenting an updated version of “The Diary of Anne Frank” at 7 p.m. Friday and Saturday and 2 p.m. Sunday at the high school. Cast and crew have been working on this play since January.
The show is about two Jewish families who are hiding from the Nazis in Amsterdam during the height of World War II. Anne Frank was a 15-year-old girl who wrote a diary that chronicled the 25-month ordeal of hiding in an attic room from 1942 to ’44. Many are familiar with the 1952 play and ’59 movie, but LHS English and drama teacher Rachel Becker said the group is doing an updated version from the 1990s. More details in the Lebanon Reporter.