You Are Here:Home>Obituaries>Larry Michael Scott 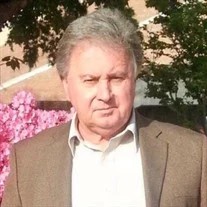 Mr. Larry Michael Scott, 71, passed away Saturday, August 8, 2020, at St. Vincent’s Hospital in Indianapolis, Indiana. He was born in Lebanon, Indiana on October 26, 1948, a son of Alice Marie (Philbeck) Bates and the late Robert Edward Scott.

He was a 1967 graduate of Lebanon High School. On June 13, 1970, he was married to Debbie Taylor in Lebanon; they later divorced, and she survives.

Larry worked for the State Highway Department right after high school. He later went on to deliver milk for Prairie Farms, retiring in 2012. Following retirement, he enjoyed being a greeter at Meijer in Anson and in 2017 published his own book, “A Whisper in the Wind.”

He was of Lutheran faith and enjoyed the simple things in life. Larry was a wonderful storyteller, loved music, watching movies, nature, photography, leisure daytrips, and being with his family.

Inurnment of ashes will be held at Oak Hill Cemetery in Lebanon.

A Celebration of Life will be held at a later date.
Boone County Crematory has been entrusted with cremation arrangements.