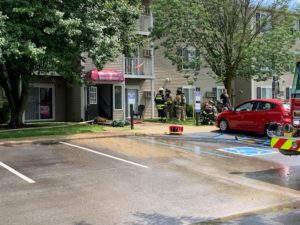 On July 21st at approximately 3:06 PM, Boone County Dispatch started fire apparatus to 1913 Lafayette Avenue (Kise Apartments) in Lebanon for a reported structure fire. Due to a secondary structure fire that had been reported several minutes prior, outside agencies were requested to assist with both incidents. Upon arrival fire crews observed heavy smoke coming from the attic area of the structure and a fire was reported in the third floor mechanical room. Crews made an aggressive interior attack and found fire and smoke conditions on the third floor. Access was made to the attic area and crews quickly brought the fire under control. Crews remained on scene for several hours for salvage and overhaul operations and to conduct an investigation as to the cause of the fire. It should be noted that after investigation, the secondary structure fire was found to be a possible lightning strike in the area that did not result in a fire. After discussion with individuals present and an examination of the scene, the cause of the fire was determined to be a lightning strike. Storms had moved into the area shortly before the fire was reported and the damage to the structure were consistent with this conclusion.
There were twenty-four apartment units in the structure affected by the fire. Twelve of those units sustained water and/or fire damage to varying degrees. Ten of the units were reported to have been rented at the time of the fire. At this time the Salvation Army is assisting with providing housing for three renters displaced by the fire. They will assist any other renters as the need arises, as well.
The Lebanon Fire Department would like to thank Whitestown Fire Department, Zionsville Fire Department, Pike Township (Indianapolis) Fire Department, Thorntown/Sugar Creek Township Fire Department, Center Township Fire Department, Lebanon Police Department, the Salvation Army, the Boone County Sheriff’s Office, and Boone County EMS, who all assisted with scene response during this incident. Additionally, thank you to Boone County Dispatch for your management of resources and assistance throughout this incident.