You Are Here:Home>Obituaries>Lloyd Edward Lee 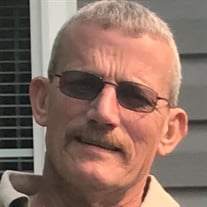 Mr. Lloyd Edward Lee, 61, passed away Thursday, September 30, 2021 at his home in Lebanon with his loving family by his side.

Mr. Lloyd Edward Lee, 61, passed away Thursday, September 30, 2021 at his home in Lebanon with his loving family by his side. He was born in Lebanon on August 6, 1960; a son of the late Lloyd Earl and Beulah Geraldine (Biech) Lee.

He attended Lebanon High School. In 2001, he was married to Tammy (Wethington) Lee; she survives.

Lloyd could build anything and was a jack of all trades. He enjoyed the great outdoors, hunting, relaxing at his cabin in Carthage, Indiana and attending sporting events with his kids and grandkids. He was a devoted husband and a loving father, grandfather, and brother who will be greatly missed.

Private Family Services will be held at a later date. Myers Mortuary and Boone County Crematory have been entrusted with his arrangements.

Memorials may be directed to Myers Mortuary to assist the family.