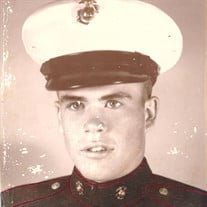 Mr. Loren Jackson Bishop, 84, passed away Tuesday morning, November 30, 2021, at the Terre Haute Regional Hospital in Terre Haute, Indiana. He was born in Lebanon, Indiana, on September 14, 1937, a son of the late Joseph Harold and Helen Gertrude (Wethington) Bishop.
On December 25, 1959, he was married to Dorothy J. (Helton) Bishop in Warsaw, Indiana. She preceded him in death on November 18, 2016.
Raised in Boone County, Loren attended Whitestown High School. He served his country honorably with the Indiana National Guard from 1953 – 1956 and then the United States Marine Corp. from 1956 – 1959. He received his GED while serving in the Marines.
In 1964, Loren worked as an inspector and technician for Ford Motor Company in Indianapolis until his retirement in 1994. He attended Franklin Flight School from 1972 – 1976 and was an active certified flight instructor until 1984.
Loren was an active member of the American Legion Post 341 in Cicero, Indiana. After moving to Terre Haute, he proudly served in the American Legion Color Guard as well as the Marine Corp. He had a passion for flying and enjoyed being with his family.
Survivors include a son, Benjamin J. Bishop of Terre Haute; daughters, Sandra G. (Tom) Henry of Indianapolis, Paula Bishop of Terre Haute, and Jackie Bishop of Terre Haute; grandson, Zachary T. (Tiffany) Elston of Cincinnati; three great grandchildren, Lilah Marie, Harlee Storm, and Axel Joshua; brother, Robert E. Bishop of Washington Court House, Ohio; and sisters, Nancy L. Elrod of Lebanon and Judith E. (Mike) Rader of Whitestown.
In addition to his parents, Loren was preceded in death by a daughter, Debra Fay Bishop.
Private Graveside Services with Military Rites are planned at St. Joseph Cemetery in Lebanon, Indiana. Myers Mortuary has been entrusted with Mr. Bishop’s final care.
Memorials may be directed to the American Legion Post 341 in Cicero, Indiana.