You Are Here:Home>Obituaries>Louis Lee Steenbergen 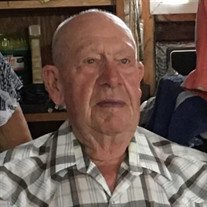 Louis Lee Steenbergen, 82, passed away at Witham Memorial Hospital in Lebanon, Indiana, on Friday, June 19, 2020. He was born in Austin, Kentucky on July 22, 1937, a son of the late Winford and Lillie Ida (Wyatt) Steenbergen.

He moved from Kentucky to Lebanon when he was 18 years old. He was first married to Dorothy Jean Tyree in 1957, they later divorced. On May 30, 2002, he married Nelda Kay (Hicks) Crockett-Steenbergen in Heartsville, Tennessee; she survives.

Louis was a truck driver, working for Turner Trucking in Lebanon for 27 years and then Preston Trucking Company in Indianapolis for a few years. He retired October of 1994. During his retirement, he helped Gene Williamson take care of the Kashner Apartments on North Lebanon Street.

He was a member of the Teamsters Union Local #135 in Indianapolis, the First Baptist Church of Lebanon, and a former member of the Lebanon Eagles Club and American Legion.

Louis loved his family immensely and enjoyed attending his grandchildren and great grandchildren’s sporting events and activities. In addition to being with family, he also enjoyed football, baseball, and NASCAR races.

In addition to his parents, Louis was preceded in death by his brothers, Kenneth Steenbergen and Glendon Steenbergen.

Memorials may be directed in his memory to the First Baptist Church, 207 East Washington Street, Lebanon, Indiana 46052.