You Are Here:Home>Obituaries>Loyd Wayne Heck 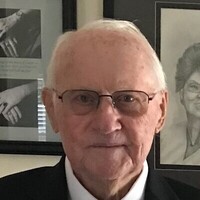 Loyd was born July 29, 1930 in Ashboro, Indiana to the late Fred W. and Verna (Deeter) Heck. He was raised in rural Clay County where he worked on the family farm with his dad and siblings. He was the last survivor of eight children.

Loyd graduated from Cory High School in 1949 where he excelled at both baseball and basketball. He took great pride in his individual and team athletic achievements, especially since Cory was such a small school. He served in the U.S. Army from 1951-1953 as a Military Policeman stationed in Tokyo, Japan.  In 1953, he was appointed to the Indiana State Police as a Weigh Master, and after graduating from Recruit School in 1955, served as an Indiana State Trooper and Detective at the Terre Haute Post. He was awarded the Sagamore of the Wabash by Governor Otis Bowen for his outstanding investigative work. After retiring from his 34-year career with the State Police in 1987, he spent the next 14 years as an Investigator for the Indiana Supreme Court Disciplinary Commission. While this was the end of his formal career, Loyd never stopped working smaller, local jobs as he relished being active and providing for his family.

All who knew Loyd would agree, he took immense pride in his yard – the freshly cut grass, perfectly trimmed edges, and beautiful Spring flowers that received a daily watering. He could frequently be seen riding his John Deere lawn mower – meticulously mowing his own yard and often the yards of those around him, even into his late 80s.

Family and friends will gather Tuesday, Feb. 8, for visitation from 5 p.m. until 8 p.m. in the Strawmyer & Drury Mortuary, 2400 N. Lebanon Street, Lebanon. A funeral service will be held Wednesday, Feb. 9, at 11 a.m. with Pastor Kurt Alexander officiating in the funeral home. Loyd will be laid to rest at Oak Hill Cemetery in Lebanon. In lieu of flowers, donations may be made to Lebanon Christian Church in his memory.