You Are Here:Home>Obituaries>Marcia K. Mossman 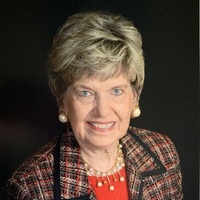 Marcia Keller Mossman, 88, of Lebanon passed away on Tuesday, September 21 peacefully in her home after a diagnosis of cancer in July. She was born June 1, 1933, in her family farmhouse in Knox County, Indiana. She was the first child of three born to the late Vincent and Florence (Anleitner) Keller.

Marcia’s formative years were spent in Vincennes where she was a member of St. John’s Catholic Church and was graduated from St. Rose Academy in 1951. She married her sweetheart and best friend James (Jim) Robert Mossman on Valentine’s Day, 1953. They moved to Lebanon in the spring, where they have lived their entire 68 years of marriage.

Marcia and husband Jim raised their seven children in Lebanon and were both very active in the community. Jim worked at the Lebanon Reporter for 40 years, retiring in 1994 as General Manager and Publisher.  Marcia supported him in his work, working part-time in various roles in the newspaper office and accompanying him on many business trips. They also had a picture framing business, which they worked out of their home basement. Marcia had an Avon business and also worked at Holliday Park in Indianapolis, where she cataloged and marked floral, plant and tree specimens. In her late teens and early 20’s she had two very fun jobs: using her musical talent to demonstrate and sell pianos and using her charm and wit to model and sell wigs.  While their children were still living at home, they spent summer vacations travelling throughout the U.S. in a camper, visiting sites and collecting friends at KOAs.

Marcia was active in St. Joseph’s Catholic Church for 68 years, serving the Women’s Club, singing in the choir and maintaining the Meditation Garden. She and Jim also sponsored many couples for marriage preparation.  She was a Girl Scout Leader for 10 years and taught swimming lessons for the Red Cross.  Marcia was a devoted member of the DS chapter of P.E.O., serving several years as chaplain. She was a member of Psi Iota Xi from 1951-2021 serving on many committees and as President. As a Psi Iota volunteer, she designed and maintained an island garden in the Lebanon Memorial Park for decades. The island garden was named in her honor; the park gazebo now sits on the island. She was chosen as Mrs. Boone County 1965, which she considered a special honor and so devoted time every year afterwards to help recognize and encourage other civic and family-minded women of the county.

After all seven of her children had nearly finished (high) school, Marcia enrolled in IUPUI, where she was graduated in 1984 with a degree in Geography and English. She took graduate classes at Purdue University from 1985-1987.  These educational experiences led to an interest in Geology, Archeology and History. She was a voracious reader and applied herself to gaining an in-depth understanding of each of these subjects. She and Jim travelled extensively throughout the U.S., Central and South America, and Eastern and Western Europe.

Marcia had many hobbies including gardening, sewing and crafts, jewelry making, going to festivals, flea markets and garage sales, collecting vintage valentines, bells, crystal, perfume bottles, formal dresses and anything blue.   She enjoyed playing bridge and was a longtime member of an afternoon and an evening bridge club.  She and Jim also loved ballroom dancing and were members of the Continental Dance Club and the Irvington Dance Club in the 1990’s-2010’s. Marcia’s greatest pleasure and purpose in life was her faith, friends and family.

The family wishes to express their sincere appreciation to all the wonderful staff at Asera Care Hospice, private caregivers, friends, and their parish family for all the love, support and dedicated care for Marcia and Jim during the last few difficult months.

Preceding her in death in addition to her parents are brother Dick Keller, sister-in-law Martha Mossman Klepfer and brother-in-law Jack Mossman.

The funeral Mass will be held at 10:00 am on Saturday, Sep. 25, at St. Joseph’s Catholic Church, 319 E. South Street, Lebanon, followed by interment at St. Joseph’s Cemetery and luncheon in the Parish Hall.

In lieu of flowers, memorial contributions may be made to St. Joseph’s Catholic Church, or to the Lebanon Memorial Park, 130 E. Ulen Drive, Lebanon.  Share memories and condolences online at www.strawmyerdrury.com