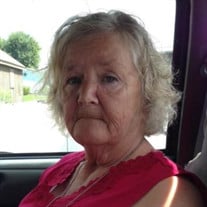 Maridell Summers, 75, passed away Thursday morning, December 9, 2021, at her home in Lebanon, Indiana. She was born on December 16, 1945, in Lebanon, a daughter of the late Curtis Austin and Juanita Geraldine (Dickerson) Smith.

On August 27, 1966, Maridell was married to Charles A. Summers in Milledgeville. They later divorced. Her longtime companion, Sparky “Pops” Childers, has been by her side and lovingly cared for her for years.

Maridell received her CNA license and was a certified nurse aide for many years. She also worked in the school cafeteria while living in Florida for a few years.

She was a devoted mother, grandmother, great grandmother, and friend. She was kind, generous, and always put her family first. Maridell lived for her grandchildren.

In addition to her parents, Maridell was preceded in death by a daughter, Malinda “Mindy” Summers; and a sister-in-law, Janice Smith.

Boone County Crematory has been entrusted with her cremation arrangements following services.

In lieu of flowers, memorials may be directed to Myers Mortuary to assist the family with expenses.