You Are Here:Home>Obituaries>Marilyn “Susie” (Surface) Goforth 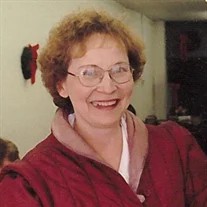 Marilyn “Susie” (Surface) Goforth, 73, finished her race and received eternal life with her Lord and Savior on August 23, 2020 at Wellbrooke of Avon in Avon, Indiana. Susie was born in Crawfordsville, Indiana on August 15, 1947; a daughter of the late William Surface and Mariam (Everson) Surface. Susie was a 1965 graduate of Crawfordsville High School.

On February 19, 1966 she married her high school sweetheart, James “Mike” Goforth. While inseparable, strongly connected in the Lord, and full of joy, Susie and Mike spent 53 years together before his passing. Their love was boundless. Susie was greeted at the gates of heaven by her soulmate, who passed eight months prior.

In their own words, Susie and Mike were always running for the “Grandparents of the Year Award,” and in the eyes of their grandchildren, they won every year. Susie was at every concert, football game, basketball practice, art exhibition, and musical that her grandchildren did. Susie and Mike also would make the 700-mile trek to Tulsa, Oklahoma to see Jeff and his family for various birthdays, celebrations, and holidays. Susie’s grandchildren often held competitions to see who could make her laugh the hardest, as her laughter was infectious. Susie was a phenomenal woman, and an even greater Grandma and Mom.

Susie was often described by friends and family as a fighter. After countless car accidents, a multiple sclerosis diagnosis, a fight with breast cancer, and other ailments, Susie consistently fought these illnesses, often with a smile on her face and a sense of joy. To commemorate her battles, Susie attended the Relay for Life Survivor Dinner annually. Susie was an example of perseverance and faith in a healing God.

In her free time, Susie was an avid writer, whether holding a column in the Lawrence Journal, writing Sunday school curriculum, taking notes during Mike’s sermons, or writing for leisure. Susie also enjoyed singing and music. While only having a short stint on the center stage in “Night of January Sixteenth” in school, music and theater brought great happiness to her for the rest of her life. Susie enjoyed belting out tunes from “Oklahoma!” and “Sound of Music.” She also enjoyed oldies and hymns, often beating everyone else out at “Name That Tune.”

Graveside Services will be held on Monday, August 31, 2020 at 11:00 a.m. at Lincoln Memory Gardens Cemetery, 6851 S Indianapolis Road, Whitestown, Indiana. To help prevent the spread of coronavirus, the family requires that all attendees wear face masks, social distance during the service, and avoid physical contact.