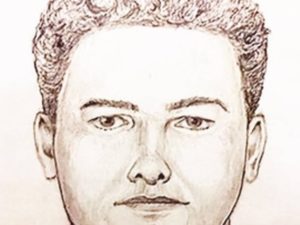 (Delphi, IN) — The new sketch of the man who police say killed two teens in Delphi is a lot younger, and skinnier. The Indiana State Police yesterday released a new sketch of their suspect in the 2017 murder of Liberty German and Abigail Williams. Police also released a longer piece of audio that they say has the suspect telling the teens to walk down a hill. Investigators are asking everyone to look at the sketch, then tell them if they recognize the man.