You Are Here:Home>Obituaries>Obituary For George Arthur Wilson II 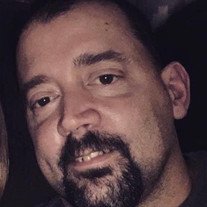 George A. Wilson, II, 52, of Lafayette, Indiana, passed away on Thursday, June 27, 2019, at Franciscan Hospital in Lafayette after a long battle with lung cancer. He was born in Deer Born, Michigan April 16, 1967, a son of the late George A. and June E. (Orr) Wilson.

He graduated from East High School in Pennsylvania.

George was self-employed in the flooring and construction business.

George attended Light House Baptist Church in Lebanon and was a member of the Elks and Freemasons. He enjoyed fishing, hunting, camping and really anything that involved the great outdoors. He was an avid reader and a loved to play games on his play station.

Visitation will be held from 3:00 p.m. until the time of service on Tuesday, July 2 at the funeral home in Lebanon.

Memorials may be directed to Horizon Oncology Center, 1345 Unity Place #345, Lafayette, Indiana 47905. Myers Mortuary and Boone County Crematory have been entrusted with his care.