You Are Here:Home>Obituaries>Obituary For John Eddie Ford 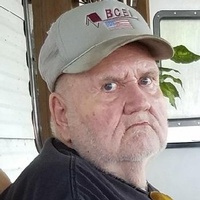 Mr. John Eddie Ford, 73, of Lebanon and formerly from Advance and Mechanicsburg, passed away Mar. 10, 2019.

From 1965 to 1978, John worked for the Advance Fire Dept., the Jamestown, Advance and Thorntown Police Dept. as a radio cop and dog catcher and Hopper Enterprises as a heavy equipment operator. He also worked for Eugene Smith Farms from 1978-1981.

John enjoyed many friends who he met at his time at Sugar Mill Lake Campground. The family wishes to thank them for their kindness during their dad’s time there. Jay and Ginger, Bob and Patty Downs always checking on dad even when he was not at his camper; and keeping in touch with the family during his long illness, even when they were in Florida during the winter. Thank you to all his friends at Sugar Mill for coming by when he lost his eye sight and could no longer drive his own golf cart and see them; so they came to see him. He had a wonderful Sugar Mill Lake family and he loved each and everyone of you!

John enjoyed fishing, hunting, butchering, crosswords, camping, woodworking, and making sun catchers and key chains. Sitting on his camper’s porch and watching the lake, talking to friends and making new friends. John was one who never met a stranger. He may forget your name but always remember your face.

The family also wishes to thank Brookdale Hospice for their many hours of care and dedication to dad during his illness; Carrie, Charlie, Nan, Paula, Heather, and all the support staff that has assisted us with deliveries of equipment and oxygen, or was just there to listen when we needed to talk. Parkside Pharmacy and staff for their willingness and time dedicated to those hospice prescriptions and deliveries. Nor must we forget to thank Dr. Hornbecker, his nurse Sandy and the staff of Witham Internal Medicine. We also wish to thank the many friends who have helped sit with dad: Judy, Bill and Dixie, and Shannon. We also wish to thank the staff of Homewood for all their years of service of caring for dad in his times of illness and support of our family. This is the kind of support that will never be forgotten.