You Are Here:Home>Obituaries>Oren Lavern Wing 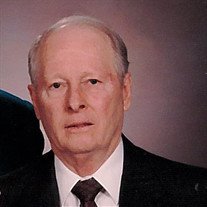 Oren Lavern Wing died on Sunday evening, July 28, 2019, in his home in Lebanon, Indiana. He was 86 years old. Lavern was born on January 18, 1933 in Lebanon, a son of the late Oren Ellis and Marjorie Evelyn (Weber) Wing.

Lavern was a 1951 graduate of Perry Central High School and a 1955 graduate of Bob Jones University in Greenville, South Carolina.

Lavern was a devoted husband, father of four, grandfather of three, and great-grandfather of five who exemplified the love of God in every aspect of his life. Following his wife Martha’s death on September 20, 1997, he became an avid genealogist tracing his family’s history and even performing upkeep on many of his family cemeteries. In 2004, he left his wife’s hometown of Luray, Virginia, to return to his home in Lebanon, Indiana, to live out his later years.

A funeral service will be held at Mt. Tabor Regular Baptist Church on Wednesday, July 31, 2019 at 1pm with a viewing beginning at noon. His interment will follow at 11am on Saturday, August 3, 2019 at Beahm’s Chapel Cemetery in Luray, Virginia.