You Are Here:Home>Obituaries>Patsy Ann (McElvain) Sanders 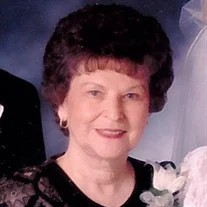 Patsy Ann (McElvain) Sanders, 91 years old, died peacefully at home in Parrish, Florida, surrounded by her family on Thursday, September 17, 2020. She was born on May 14, 1929, in Richmond, Indiana, to the late Donald E. McElvain and Irene A. (Kane) McElvain.

In her early years, Patsy was a homemaker to her three small children and also graduated from Richmond Business College. She then worked part-time for the Richmond High School Administration Office. She also gave piano lessons, and her love of music had her also playing the accordion. The family then moved from Richmond to Lebanon, Indiana, to become an original partner with Jack Day and Don Stewart to start Triangle Asphalt Paving Corporation where she was a bookkeeper. Following their retirement in 1977, Patsy enjoyed traveling around the country to festivals with her husband selling his creations with turquoise jewelry. In 1979, she and Bill moved to Dayton, Tennessee and started the Bluewater Campground on the Tennessee River. They moved back to Lebanon in 1989 to be close to their family. Patsy then formed a partnership with her son, Don Sanders, Sanders and Associates. She was also the bookkeeper for her son-in-law, Harold Kinsler: Kinsler’s Home Services. After the death of her husband, Bill, and due to declining health, Patsy moved to Florida with her daughter, Kathy and son-in-law Harold in November of 2015, where she resided until her death.

Her past and current memberships include Ulen Country Club with her late husband, Bill, where she enjoyed playing bridge and golf. The Kappa Delta Phi Sorority where she has been a member for 56 years, having held different offices. She truly loved and enjoyed her sorority sisters, with whom she missed deeply when becoming an associate. She has also been a member of the Richmond and Lebanon Chapters of the Daughters of American Revolution where she also held several offices for 66 years. She further held a membership in Daughters of American Colonists. Patsy loved doing research in genealogy and had worked on becoming a member of the Mayflower Society. She was also a long-time member of St. Peter’s Episcopal Church before her move to Florida.

Wherever she went, she made friends easily and was known for her kindness and her beautiful smile. She was the sweetest person, with just enough vinegar to keep it fun. A devoted wife, mother and Nana she loved her family dearly. They will always be grateful for her unconditional love and support, and she will always be in their hearts.

In addition to her husband, Bill, Patsy was preceded in death by her parents, and brother, Donald William (Bill) McElvain and a great-granddaughter, Olivia Irene Solomon.

Memorials may be made to help children receive cochlear implants at St. Joseph Institute for the Deaf, 9192 Waldemar Road, Indianapolis, Indiana, 46268.

Due to Covid-19 and family traveling, graveside services will be held at a later date and interment at Oak Hill Cemetery, in Lebanon, Indiana. Myers Mortuary and Boone County Crematory have been entrusted with her arrangements.