You Are Here:Home>Obituaries>Peggy Louise Stout 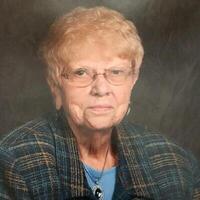 Peggy had worked as a clerk for 23 years, beginning with Stewart Warner, then the Lebanon Utilities, the City of Lebanon, and Statesman Insurance Company, retiring in 1994. Peggy was a member of the New Brunswick Church of Christ, the Phi Chi Epsilon Sorority, the Ladies Elks, and the American Legion Auxiliary.

Peggy enjoyed spending time with family and friends, traveling, and going to spend time with her friends at the Elks.

Family and friends will gather Saturday, January 28 for visitation from 10:00 a.m. until the time of the funeral service at 12:00 p.m. in the Strawmyer & Drury Mortuary, 2400 N. Lebanon Street, Lebanon. Peggy will be laid to rest beside her late husband, Emil Hollingsworth, at Oak Hill Cemetery in Lebanon.

Memorial contributions in her memory may be made to the Lebanon Elks Lodge.