You Are Here:Home>Obituaries>Richard L. Boggs 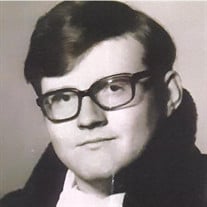 Richard L. Boggs, 65, of Lebanon, Indiana, passed away on January 3, 2022, at Signature Healthcare at Parkwood in Lebanon. He was born in Lebanon on May 8, 1956, a son of the late Troy Cecil and Dorothy Louise (Ottinger) Boggs.

He was a 1974 graduate of Clinton Central High School. Richard served his country honorably in the U.S. Navy. He worked for Purity in Lebanon as a forklift operator and also on the assembly line, retiring in 2018.

Richard was a member of the American Legion Post #113 in Lebanon. He was a kind and caring son, brother and uncle who enjoyed computers, leisure rides, and going out to eat.

In addition to his parents, Richard was preceded in death by three brothers, Bill Blazier, Donald A. Blazier and Randall T. “Randy” Boggs.

A Celebration of Life will be held at a later date. Myers Mortuary and Boone County Crematory have been entrusted with his cremation arrangements. Memorials may be directed to the charity of the donor’s choice.