You Are Here:Home>Obituaries>Robert Maley Harman 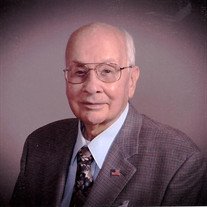 Born December 20, 1928 in New Albany, Indiana, he was the son of Robert C. and Mary (Maley) Harman. The family moved to Lebanon when he was seven, and he graduated from Lebanon High School in 1947. He then attended Lincoln University in Harrogate, Tennessee where he played varsity basketball. He went on to proudly serve in the U.S. Navy Air Transport Squadron VR 31 in Norfolk, Virginia.

Bob joined his parents working at Harman Agency Real Estate and Insurance, Inc. in 1950. He ran the company from 1953 until his retirement December 31, 1990.

He joined First Baptist Church in Lebanon in 1951 where over the years he served as a trustee, deacon, usher and sang in the choir. He later joined Centenary United Methodist Church of Lebanon.

On September 14, 1952 he married the love of his life, Helen Marie Ulrey, in Lebanon. They enjoyed over 60 years together travelling, remodeling their homes, and raising their family.

In 1953 Bob was a charter member of the Lebanon Kiwanis Club, and was its eighth president. He started the Thorntown and Zionsville chapters, as well as the LHS Key Club. He was named Distinguished Lt. Governor of the Sagamore Division of Indiana and was honored with the 40-year Legion of Honor Kiwanian Award. Bob was a devoted member with perfect attendance, going so far as to locate and attend meetings when travelling on family vacations.

In 1959 he received the Junior Chamber of Commerce Distinguished Service Award. He helped organize the Boone County Board of Realtors and served as President of the Board. He was a drive chairman of the Boone County United Way and sat on the Board of Directors. Bob also enjoyed memberships in the Elks and Masonic Lodge and sang bass with barbershop quartets for decades. A highlight was singing with his quartet, the Harmony Hustlers, for the International Kiwanis convention in Montreal, Canada.

Bob was a first-rate carpenter and craftsman, ardent supporter of the Lebanon Tigers, and loved attending the Indy 500 for decades. He was an avid wood turner, creating hundreds of pieces which he gave to family, friends, churches, and presidents.

He was preceded in death by his parents, sister Patricia, and wife, Helen. He will be missed by his daughters, Janet Biggerstaff and Kathy Dickison; grandchildren, Tom (Melissa) Threlkeld, Sam, Marie, and Charlie Dickison; and great grandchildren, Lincoln and Sawyer Threlkeld.

The family wishes to thank the many healthcare workers and caregivers at CrownPointe, Homewood, Witham, and St. Vincent hospitals for their efforts to make Bob’s final months comfortable and happy.

The family will greet friends on Wednesday, March 24, 2021 from 11:00 a.m. to 2:00 p.m. at Centenary United Methodist Church, 910 Fordice Road, in Lebanon. Funeral Services will be held at 2:00 p.m. with Joseph Huse and Rev. Peter Curts, officiating. Please follow CDC guidelines, wear a mask and social distance. Bob will be laid to rest at Oak Hill Cemetery in Lebanon at a later date.