You Are Here:Home>Obituaries>Robert Marion “Bob” Bailey 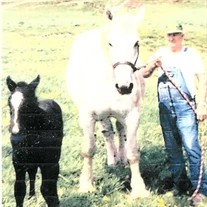 Robert Marion “Bob” Bailey, 94, formerly of Zionsville, Indiana, passed away Sunday, July 19, 2020 at Homewood Health Campus in Lebanon. He was born in Sheridan, Indiana on August 23, 1925; a son of the late Raymond and Frances A. (Marlow) Bailey.

He was a 1943 graduate of Sheridan High School.

A native of Boone County, Bob farmed grain and livestock for many years in the Zionsville area. He attended Grace Baptist Church in Lebanon.

Bob was a devoted husband, father, and grandfather. He enjoyed living and working on the farm, had a love for Percheron draft horses, and just being with family.

In addition to his parents and wife, Bob was preceded in death by a son, Michael E. Huffman; two brothers, Tom Bailey and Sam Bailey; and a brother-in-law, Bob Howe.