You Are Here:Home>Obituaries>Ryan Matthew Musser 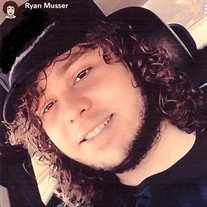 Ryan Matthew Musser, 21, passed away on Saturday, June 13, 2020 at Witham Memorial Hospital in Lebanon, Indiana. He was born in Indianapolis, Indiana on July 20, 1998; a son of James T. Howard, Jr. and Catherine D. “Cathy” Musser.

He attended Lebanon High School and worked in the food service industry as a cook, starting out at Bekah’s and later worked at Jimmy Johns and AVI Foods in Lebanon.

Ryan was a loving son, father and brother. When he was younger, he enjoyed attending the Lebanon Boys & Girls Club. He also enjoyed football, basketball, video games, fishing and spending time with his kids. He was also a member of the Light House Baptist Church in Lebanon.

Funeral Services will be held at 2:00 p.m. on Wednesday, June 24, 2020 at the funeral home in Lebanon with Pastor Merv McNair officiating. Interment will follow services at Oak Hill Cemetery in Lebanon.

Memorials may be made for the benefit of Ryan’s children.