You Are Here:Home>Obituaries>Sally L. Sanders 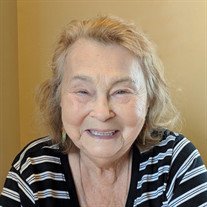 Sally L. Sanders, 85, passed away Saturday, April 24, 2021 at St. Vincent Hospital in Indianapolis. She was born on February 23, 1936 in Lebanon, Indiana, a daughter of the late Leon and Juanita (Sandlin) Green.

She attended both Dover and Perry Central High Schools, graduating from Perry Central. Sally was married to Harrison J. “Bud” Sanders and he passed away in 1985.

She worked many years at the United Methodist Children’s Home in Lebanon Sally loved coloring with her gel pens, sitting in the sun on her porch swing, going on long drives, word search puzzles, traveling to many different places on YouTube and spending time with her grandkids.

In addition to her parents and husband, Sally was preceded in death by her brother, Russell Green.

Funeral Services will be held at 1:00 p.m. on Wednesday, April 28, at the funeral home in Lebanon. Interment will follow at Browns Wonder Cemetery in Lebanon, Indiana.