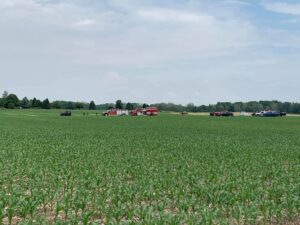 Investigators are not sure why a small plane from Indianapolis crashed into a cornfield in Montgomery County over the weekend. The Indiana State Police say the two people on board the plane both died. The plane took off from the Lift Academy in Indianapolis and crashed about 10:30 yesterday morning. The academy says it is heartbroken by the crash but didn’t have any specifics as to just what happened.