You Are Here:Home>Obituaries>Stephen L Gebbia 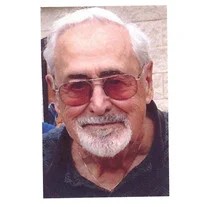 Stephen L Gebbia, 89, died peacefully after a long, full life.
Steve was a devout Catholic, who believed in family and a good education. A descendant of Sicilian immigrants, he and his sister, the late Frances (Jerry) Roethle, were born and raised in Rockford Illinois, by their parents Fred and Frances (Palmeri). Steve left Rockford at the age of 16 to attend Purdue University, where he earned a B.S. in Mechanical Engineering. He then earned an MBA in Industrial Management from DePaul University.

Immediately after graduating, his Korean War draft deferment ended and he was assigned to serve in the Army Chemical Center at Edgewood Arsenal in Maryland, where he met his wife of 65 years, Doris. After the war, they married and moved to Chicago, where Steve started his long career in the steel forging industry, first with Taylor Forge, then as plant manager at A. Finkl & Sons.

Steve and Doris married in April 1955 and soon after, started their large family of 8 children, 16 grandchildren, and 5 great-grandchildren.

After Steve retired, he and Doris moved to Lebanon, Indiana, where they have lived, and made numerous friends, for more than 20 years.

A Funeral Mass will be held at 11:00 a.m. on Saturday, November 7, 2020 at St. Joseph Roman Catholic Church, 319 East South Street, in Lebanon, Indiana. The family kindly asks for attendees to follow the CDC guidelines, please wear masks and social distance.

Memorials may be given in his memory to St. Vincent de Paul.